“I know I just now met Joe Biden for the first time in my life, but I feel like he’s had my back for years,” said Aguilar, a second-generation member of Local 68. “President Joe Biden is not just pro-union. He’s pro-people. He’s pro-America.”

Biden saluted IBEW electricians as “the best in the world,” as he thanked Aguilar and discussed the urgency of renewable energy.

“Whether you’re an engineer at a lab bench, an IBEW worker working on a turbine, [whether] you work for a power company or a small construction business, everyone has a role to play in building a clean energy future and a stronger economy,” Biden said at the Department of Energy site where Local 68 members are at work on a solar installation project. Colorado Gov. Jared Polis joined them.

Biden championed his bold, job-creating infrastructure plan, as Congress was continuing negotiations over it.

“[It] contains the largest federal investment in power transmission in our history, so that our grid is more reliable, and we can carry more renewable energy [and] we can create good union jobs building that new grid.”

In attendance at the DOE site were dignitaries, energy executives and IBEW members.

“Being here at NREL shows the future of our industry, renewable and sustainable energy,” Aguilar said in his introduction:

Smart grids, wind farms, and solar farms are just a few examples here in our great state of Colorado. When you see all these new technologies, you might think that the future doesn’t look much like the past.

But one thing the past and future will have in common is they will be built by unions. I know that’s the future that President Biden, and my IBEW brothers and sisters are working hard to build every day. 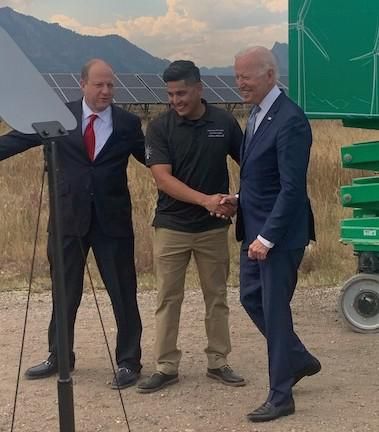